Who were Amazons and Maenads? Was there ever a time women were in power? Who were Sappho, Aspasia, Cleopatra, Clodia, and Livia? What was the reality of women's lives in classical Greece and Rome?

In the course we will look at women's public and private lives, their participation in cult and the economy, and society, their experience of childbearing, marriage, and death. Literature, history, medical texts, inscriptions, art, and architecture will be our sources and we will hear women's own voices in poetry, epitaphs, letters, and other documents.

This course also counts towards the Gender, Sexuality, and Women's Studies major.

Sample Syllabus for Women in Antiquity 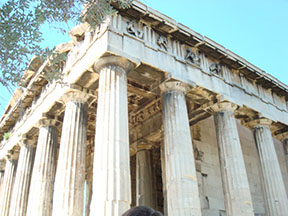 The course will be an introduction to archaeology in Greece during the Bronze, Classical, Roman, Byzantine and Ottoman Periods. We will begin the course on campus with a brief overview of Greek history and material culture. We will then spend most of the course visiting sites throughout Greece, including Athens, Delphi, Olympia, Mycenae, Corinth, Bassae, and Crete. We will see temples, palaces, cities, sanctuaries, theaters, athletic facilities, and government buildings. In addition, we will spend time in the major museums of Greece examining sculpture, vases, jewelry, and items of everyday use in the ancient world. For students interested in anthropology, architecture, art, art, history, classics, geology, history, kinesiology, literature, politics, religion, and theatre.
Prerequisite: one course from GRE, LAT, CLA, or ANT
Course Cost: $3,850 (est.) [includes airfare, in-country, transportation, hotels, some meals, excursions/guides] This in an introductory course in Roman history that will cover major social, economic, and political developments from the founding of Rome to the reign of Constantine, with an emphasis on Rome’s rise to power beginning with the Punic Wars to the reign of Constantine, who transferred the capital of the empire to Constantinople. Topics to be discussed include the civil wars, the creation of empire, Rome’s place in the ancient Mediterranean world, Roman religion and Christianity. (Humanities) Venticinque

What do Charlie Chaplin, the Marx Brothers, and Mae West have in common with the great comic playwrights of Greece and Rome? In this course, you'll read comedies about women who go on a sex strike to stop a war; about a man who dresses as a woman to deceive a rival lover; and about a sausage-seller who becomes mayor of his town. You'll also have a chance to view 5-6 film comedies--starring greats such as Charlie Chaplin, Groucho Marx, and Mae West--and learn how Greek and Roman comedy lives on in the modern world.